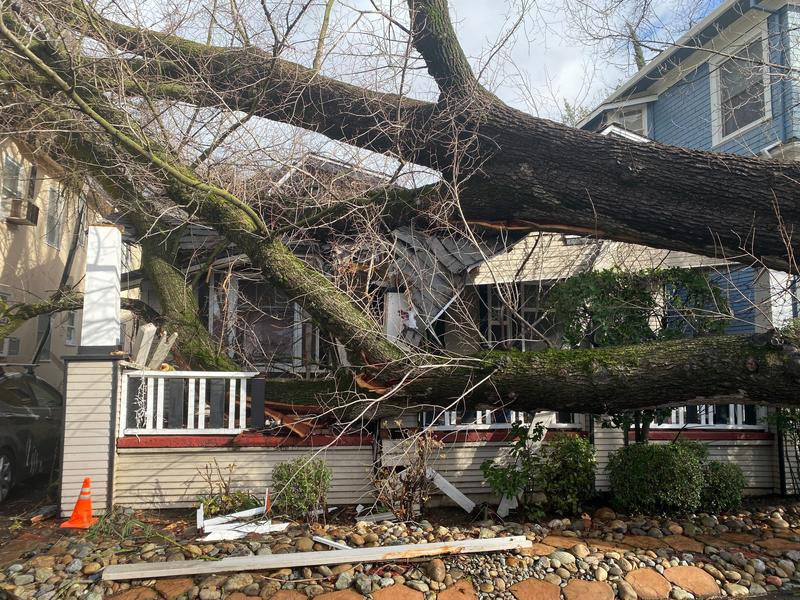 A tree collapsed and ripped up the sidewalk damaging a home in Sacramento, California, Jan 8, 2023. (KATHLEEN RONAYNE / AP)

LOS ANGELES – US President Joe Biden has declared an emergency in California as winter storms continue to pummel the most populous state in the country on Monday.

According to a statement released by the White House on Monday, Biden has ordered federal assistance to supplement State of California, tribal and local response efforts due to the emergency conditions resulting from successive and severe winter storms, flooding and mudslides.

The federal emergency declaration will authorize the US Department of Homeland Security and Federal Emergency Management Agency to coordinate all disaster relief efforts.

California Governor Gavin Newsom proclaimed last Wednesday a state of emergency throughout the western US state, home to around 40 million residents, due to the severe winter storms. Nearly 100,000 homes and businesses in California were still without power as of Monday afternoon, according to PowerOutage.us, a website which collects live power outage data from utilities all over the country

He submitted a request on Sunday to the White House for a presidential emergency declaration to support ongoing storm response and recovery efforts in the state.

Since late December, 12 Californians have died from storm-related impacts, including flooding, more than the number of civilians who lost their lives to wildfires in the past two years combined, according to a statement released by the governor's office.

"We are in the middle of a deadly barrage of winter storms — and California is using every resource at its disposal to protect lives and limit damage," said Newsom in the statement.

"We are taking the threat from these storms seriously, and want to make sure that Californians stay vigilant as more storms head our way," the governor added.

Winter storms continued to hit California with heavy rains, causing flooding, road closures and power outages in many regions across the state.

"California is expecting a stronger and more widespread atmospheric river that will bring strong winds, heavy rain, and thunderstorms," the governor's office tweeted, adding that "this is serious — stay safe, make the necessary preparations, and limit non-essential travel."

ALSO READ: Storm in California leaves over 330,000 without power

Nearly 100,000 homes and businesses in California were still without power as of Monday afternoon, according to PowerOutage.us, a website which collects live power outage data from utilities all over the country. A man tries to clear a storm drain near his house as floodwaters rise on East Lake Avenue in Watsonville, California, Jan 9, 2023. (NIC COURY / AP)

The US National Weather Service noted that nearly all of California has seen much above average rainfall totals over the past several weeks, with totals 400-600 percent above average values

Tens of thousands of people across Northern California are dealing with continued power outages on Monday, as heavy rain and strong winds caused issues on roadways but spared the region from widespread devastation, reported KCRA-TV, a television station in Sacramento, the capital of the state.

Many school districts across the region and some individual schools facing power outages have canceled classes for Monday, the news outlet added.

No significant letup is expected in the recent very wet weather pattern that has been plaguing much of California and the ongoing heavy rains Monday afternoon across central California will be dropping into Southern California Monday night into early Tuesday, said the US National Weather Service in a weather forecast on Monday.

The US National Weather Service noted that nearly all of California has seen much above average rainfall totals over the past several weeks, with totals 400-600 percent above average values.

"This has resulted in nearly saturated soils and increasingly high river levels. Additional heavy rains on Tuesday will exacerbate ongoing flooding and continue the risk of flash flooding and mudslides, especially across recent burn scar regions," said the agency.

Thousands of people were ordered to immediately evacuate Southern California's Montecito on Monday.

All residents in the community in Santa Barbara County were urged to "leave now" by local officials as "the heaviest rain is yet to come this afternoon and evening."

A total of 23 people were killed in January 2018 when a massive mudslide caused by heavy rains swept through the coastal community and destroyed 130 homes.