Tens of thousands of workers fired at large companies The COVID-19 pandemic moved much of the world online and led to a boom, especially for high-tech companies in the United States over the past two years, but it couldn't last indefinitely.

It (the layoffs) is not surprising. The reason is simple: the stock market was very high in 2021. In 2022, the value of those companies dropped significantly … those high-tech companies had to lay people off.

Now, the firing of tens of thousands of workers at Big Tech companies just a year after Silicon Valley was at its peak is sending a new message: The bull market of the past decade — which created massive amounts of wealth for tech investors, workers and the broader economy — is over.

The pain is being felt by investors faced with lower stock prices, and thousands of employees losing their jobs as companies deal with slowing economic growth, higher costs, rising interest rates and high inflation.

Online advertisements are the chief source of income for countless tech companies, but as the economy ran into trouble, many of them slashed these budgets.

After enjoying stunning growth in demand during the pandemic, many of technology's biggest players are dealing with a return to more normal demand, coupled with the impact of higher interest rates and the looming threat of recession.

Kenneth Fong, founder and chairman of Kenson Ventures in Silicon Valley, California, said: "It (the layoffs) is not surprising. The reason is simple: the stock market was very high in 2021. In 2022, the value of those companies dropped significantly. The motive of Silicon Valley is to make a lot of money. Because the companies did so well last year, California has more than $90 billion in surplus funds this year, but the state might face a budget deficit of $25 billion next year. It's wholly due to the stock market. Because the stock market dropped so much, those high-tech companies had to lay people off." 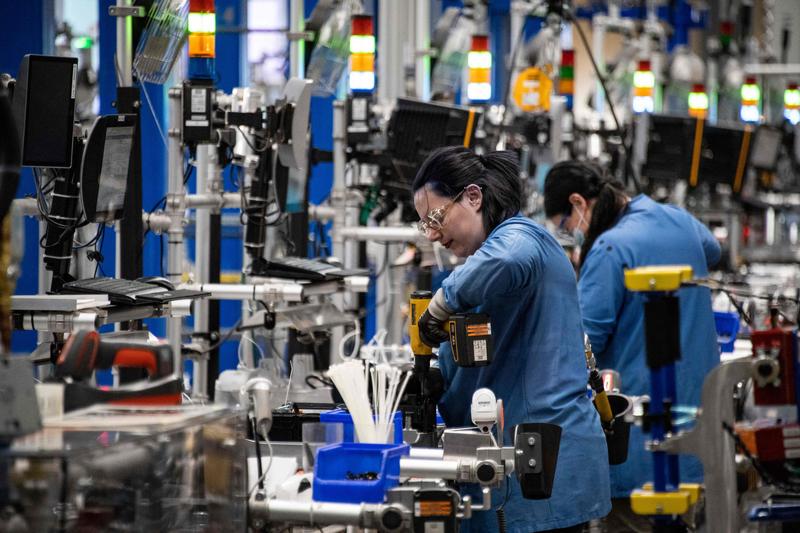 More than 35,000 tech workers at 72 US companies have been laid off this month, adding to a total of 120,000 tech jobs lost this year, according to data compiled by layoffs.fyi, which has used public records to track tech layoffs since the pandemic started.

Semil Shah, a general partner at venture capital company Haystack, told The Washington Post there may be as many as 25,000 to 50,000 unemployed tech workers in the Bay Area job market over the next few months.

However, all the Big Tech layoffs this year do not amount to 0.1 percent of the total US workforce of 164 million, according to the Labor Department.

According to the department's latest report on jobless claims, the number of people registering as unemployed fell on a weekly basis by 4,000 in the second week of this month, to 222,000 claims.

A report by Goldman Sachs' chief economist Jan Hatzius said "tech layoffs are not a sign of an impending recession".

Even though tech companies reach billions of users, they only account for a small share of the entire US workforce. If all employees working in internet publishing, broadcasting and web searches were fired simultaneously, the unemployment rate would rise by less than 0.3 percent, according to Goldman Sachs.

While many tech companies have reduced their workforce, others are still hiring. The latest Jobs Report from the Computing Technology Industry Association shows that despite the layoffs, hiring by tech companies grew in October for the 23rd consecutive month, adding more than 20,000 positions.

Facebook parent MetaPlatforms fired 11,000 people this month — about 13 percent of its workforce.

CEO Mark Zuckerberg attributed the cuts to over-hiring during the pandemic. In a letter to staff members, he cited a decline in e-commerce, the wider economic downturn, increased competition, and a decline in ad sales — the primary way the company makes money. Amazon has said that layoffs have begun at the company, but it didn't state the number of employees affected. The company attributed the job cuts to an "unusual and uncertain macroeconomic environment" forcing it to prioritize what matters most to customers.

The online retail and cloud computing giant plans to lay off some 10,000 employees in corporate and technology jobs, The New York Times and The Wall Street Journal reported. The job cuts would focus on the company's devices organization, retail division and human resources.

As of this autumn, Amazon employed more than 1.5 million full- and part-time workers globally, many of them in warehouses.

According to The New York Times, the 10,000 expected layoffs would comprise about 3 percent of Amazon's corporate employees and a significantly smaller share of its overall workforce.

In Seattle, home to Amazon in Washington state, the layoffs have ended the tech sector's unstoppable momentum that many took for granted just a year ago.

Anneliese Vance-Sherman, an Employment Security Department regional economist who covers the jobs market in the Seattle area, told The Seattle Times, "It's not necessarily surprising that some of that demand has diminished and wasn't necessarily sustainable in the long run."

The cuts announced so far represent only a tiny fraction of the region's tech workforce. State data show more than 160,000 workers at companies in the Seattle area and more than 190,000 statewide work at companies focused on information technology.

Jacob Vigdor, an economist at the University of Washington Evans School of Public Policy who follows state and local job markets, said that as of last year, Amazon had about 75,000 workers in the Seattle area, up from 53,500 in 2019.

"The most amazing thing about the Amazon layoff (report) is how small that number looks in relation to what has become the company's gargantuan size, and its rapid growth," he told the Seattle Times. Vigdor said that even if all 10,000 of Amazon's reported layoffs were confined to Washington state, "it would only be taking their local employment headcount back about a year or so".

Megan Slabinski, who oversees regional hiring for technology, marketing and creative roles at the Seattle office of recruiter Robert Half, said the current layoffs have grabbed a lot of attention because they are at "companies that you traditionally associate as a bellwether of the tech industry — but the tech industry has expanded far beyond those tech giants".

MetaPlatforms took on more than 15,000 people in the first nine months of this year. It fired 11,000 earlier this month, about 13 percent of its staff members.

Some executives announcing cuts have said they miscalculated.

"I got this wrong, and I take responsibility for that," Zuckerberg wrote in a letter to staff members.

The layoffs come as Facebook has invested billions in the Metaverse — pitched as a virtual-reality future in which people will work, mingle, exercise and go to concerts. But this is an unproven bet on the future, and not everyone is convinced it should be the social media company's focus.

Connel Fullenkamp, an economics professor at Duke University, said many layoffs are being carried out by companies correcting the mistakes they made in transitioning out of the pandemic.

Shortly after closing his $44 billion purchase of Twitter late last month, the company's chief Elon Musk shed about 3,700 employees, according to internal communications viewed by CNBC. This is about half the workforce.

Musk said in a post on Nov 4 there was "no choice" but to lay off employees, adding that they were offered three months' severance.

He said the layoffs come as Twitter is losing more than $4 million per day. In the second quarter, the last time Twitter reported earnings, revenue fell by 1 percent from a year earlier. Facebook employees take a photo with the company's new name and logo outside its headquarters in Menlo Park, California, Oct 28, 2021, after the company announced that it is changing its name to Meta Platforms Inc. (TONY AVELAR / AP PHOTO)

Companies in other industries have said they will shed jobs. Warner Bros. Discovery Inc has trimmed its payroll, while Walt Disney Co said it will likely make layoffs.

While many large companies are cutting back, the overall US labor market continues to show resilience. Employers added 261,000 jobs last month, when the unemployment rate rose to 3.7 percent.

Companies that grew quickly at the start of the pandemic are now having to adapt to weaker revenue.

Paolo Pescatore, technology analyst at PP Foresight, said: "It's been a really disappointing quarter for earnings at many of the Big Tech companies. Nobody is immune."

Mike Morini, from WorkForce Software, which provides digital management tools, told the BBC a turning point appears to have been reached.

"The tech industry is exiting a period of growth at all costs. Technology companies that grew quickly during the past two years — when COVID-19 forced millions of people to spend more time working online, going to school and shopping — have faced a reckoning as revenue growth has slowed and people turn to pre-pandemic habits," he said.

Even Apple has signaled caution, with CEO Tim Cook saying the company is still hiring, but only on a "deliberate basis".

Apple spokeswoman Kelly Nantel said, "As part of our annual operating planning review process, we always look at each of our businesses and what we believe we should change.

"As we've gone through this, given the current macroeconomic environment (as well as several years of rapid hiring), some teams are making adjustments, which in some cases means certain roles are no longer necessary. We don't take these decisions lightly, and we are working to support any employees who may be affected," Nantel said.

In an open letter to Alphabet, the parent company of Google and YouTube, activist investor Christopher Hohn urged Alphabet to slash jobs and pay, according to the BBC. Alphabet had to be more disciplined about costs, Hohn wrote, and cut losses from projects such as its self-driving car company, Waymo.

Industry observer Scott Kessler told the BBC there is less tolerance for big spending on high-tech gambles such as virtual reality or driverless cars that may not pay off in the short term. "Some companies have had to face harsh realities," he said.

But while the Big Tech companies may be buffeted by economic headwinds, they aren't broken. Amazon's proposed 10,000 job cuts in corporate and technology roles represent only 3 percent of its office staff members.

The cuts may also be the start of new businesses as talented employees, dumped by the big companies, join or create startups. As veteran Silicon Valley observer Mike Malone recently told the BBC: "I won't write the Valley off yet. I still have a lot of hope."

Amazon CEO Andy Jassy said that layoffs underway at the tech company, which will extend into next year, are the most difficult decision he has made since taking over from Bezos last year.

In a note to employees that was made public, Jassy said positions are being eliminated across Amazon's devices and books businesses.

Amazon executives have acknowledged that the devices unit has been targeted for cuts. The business, which is headlined by the Alexa voice-assistant brand, has lost more than $5 billion annually in recent years.

Dave Limp, Amazon's senior vice-president of devices and services, said in a message to employees made public on Wednesday that his team members who notified affected employees on Tuesday were working to help them find new jobs.

In some cases, those who don't find a new role at Amazon are set to receive severance of one week's pay for every six months worked, according to employees, with a maximum of 20 weeks' pay. Some employees in human resources have also been given the option of voluntarily leaving the company through buyout offers. Amazon didn't publicly provide details of severance packages.

From the end of 2019 to the end of last year, Amazon hired more than 800,000 employees, mostly at its hundreds of warehouses. Layoffs are rare at Amazon, which employs more than 1.5 million employees globally.

Jassy said Amazon continues to have growth opportunities in established and newer businesses, including advertising and Amazon Web Services, and in ventures such as healthcare and autonomous vehicles.

"Amazon has weathered uncertainty and difficult economies in the past and we will continue to do so," he said.

Agencies contributed to this story.